No permission to download
Overview History Discussion
Inspired by the oringal single player Ultima games, I modified some existing chest graphics to create mimic animations. The tongue is a modified slith tongue. The teeth are from part of an existing tooth graphic.

I had orginally hoped to create a mimic mob, but that proved a bit much, so I left it at this. Also included with the animations are some extra tiles; a mimic "lid," two dead mimics, and a possible spike trap chest. All include both facings.

I am using the mimic animations as poison traps....get too close and it opens and sticks out its tongue, poisoning you. I want to add the ability for the trap to occasionally open, giving away its true nature.

Anyway, maybe someone will find them useful, in that capacity, jsut for flavor, or in some other manner. 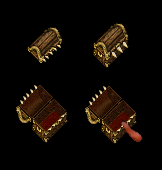