This is a plug&play command that shows a gump used to control a boat. The gump will only be opened if if player is on a boat. The gump was created by Haazen as part of his Tiller Bell script released on RunUO Forums in 2005. 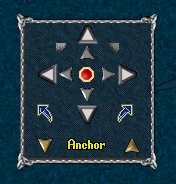 To install, just drop this script in your Scripts folder.

To use, players just need to type the command: [BoatControl