No permission to download
Overview History Discussion
Found the artwork for this in the files. I think it was originally given to the Japanese shards or something. Not positive on that though, maybe some one else knows where these were used on OSI. it is a very bright green (different than most plants I think).

Any way, its a potted tomato plant that grows through 4 stages and then produces 5 tomatoes daily. I used the potted coffee plant as a template so it works a lot like that.

Also included is a potted "weed" plant that one of my players insisted on having, if this isn't appropriate for your shard be sure to delete it! It doesn't do anything other than sit there being a potted weed plant.

There is one little glitch I found and that is it doesn't show the stages to any one other than the one who placed it... not sure why, I couldn't seem to fix it. Maybe some one else knows and I will gladly fix it up. Or feel free to fix it and upload it your self! 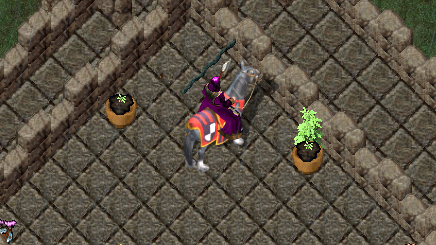