No permission to download
Overview History Discussion
I had Updated this script some time ago and released on Runuo
This comes in handy if your not using Tokens and would rather not use Gold.
This reward ticket can be given as prize or put on mobs as a drop.


I did not script it, just changed the RewardTicket Vendor Stone so it would not conflict
with Daat99's vendor stone.

First SS shows how to set the currency for RewardTicket
Following SS shows for the Price- 2 added which will be the number of tickets needed for the reward. 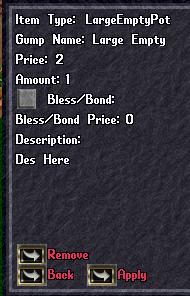