Just a set of 20 Druid spells with some Druids to fight, a few items to gain & a Druid vendor. Originally it had FertileDirt (labeled internally as FertileDirt1) as a reagent. I renamed that to FertileEarth so as not to confuse with the FertileDirt used for plants.You get an ArchDruid w/ a nifty Staff, Cloak & Druidic spellbook. An EvilDruidLord that drops the spellbook & cloak & an evil Druid that drops the cloak & most of the reagents. Might be a bit strong or weak for your server, so adjust accordingly. Both the ArchDruid & EvilDruid cast the SwarmOfFlies. Also contains 2 slightly different SleepingBody.cs for the Hibernation spell. One is in a folder named SleepingBody random timer (credit goes to Talow on that one as well as the new Druidic Spellbook gump). Sleeping bodys just randomly snore. The other (not in a folder) is set for OnMovement to trigger the snoring. And.. you can cause dragons, liches, horses & who knows what else to fall asleep with this spell. Nothing quite like a dragon laying on its side, mouth open & tongue hanging out... snoring (see pic). No idea who the original creator(s) were. This has spells from 2 different sets combined into one. Just left out the ones that were identical. 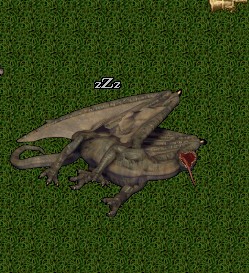 Circle Of Thorns: Creates a ring of thorns preventing an enemy from moving.

Deadly Spores: The enemy is afflicted by poisonous spores.

Enchanted Grove: Causes a grove of magical trees to grow, hiding the player for a short time.

Firefly: Summons a tiny firefly to light the Druid's path. The Firefly is a weak creature with little or no combat skills.

Forest Kin: Summons from a list of woodland spirits that will fight for the druid and assist him in different ways.

Grasping Roots: Summons roots from the ground to entangle a single target.

Hibernate: Causes the target to go to sleep.

Hollow Reed: Increases both the strength and the intelligence of the Druid.

Hurricane: Calls forth a violent hurricane that damages any enemies within range.

Lure Stone: Creates a magical stone that calls all nearby animals to it.

Mana Spring: Creates a magical spring that restores mana to the druid and any party members within range.

Mushroom Gateway: A magical circle of mushrooms opens, allowing the Druid to step through it to another location.

Pack Of Beasts: Summons a pack of beasts to fight for the Druid. Spell length increases with skill.

Restorative Soil: Saturates a patch of land with power, causing healing mud to seep through . The mud can restore the dead to life.

Shield Of Earth: A quick-growing wall of foliage springs up at the bidding of the Druid.

Spring Of Life: Creates a magical spring that heals the Druid and their party.

Swarm Of Insects: Summons a swarm of insects that bite and sting the Druid's enemies.

Treefellow: Summons a powerful woodland spirit to fight for the Druid.

Volcanic Eruption: A blast of molten lava bursts from the ground, hitting every enemy nearby.
Reactions: Oreo