No permission to download
Overview Reviews (1) History Discussion
This quest got its inspiration from a Vampire quest, the knife/body parts (by LostSinner) and an Easter Bunny Pet Quest (the Pet Statue originally by Raelis, Easter quest by Milva). The included addons, Hella's Hut and the Pumpkin Patch were taken from the PumpkinHead Quest, by dracana. All I did on the addons was rename them, to avoid duplication of items.

But I wanted a Pumpkin Pet Quest, so I edited the ideas together. Halloween needs some quest love, you know.

I recommend using the xml file. Place the xml file in your ServUO root directory and use the load command. All six spawners will place, with all settings (spawn on carry, despawn, refract). The critters can spawn regularly, but I put them on Spawn On Carry (PumpkinQuestBook), and set the Refract & Despawn times. So if you use the xml file they will be set up correctly. Also, the clues lead to where I placed the spawners. You can set them anywhere want but will need to edit the clues to fit. I put the entire quest in Malas.

After the spawners are set up, you may want to add the decoration. I use the two included addons: the Pumpkin Patch, and Hella's Shack. Hopefully the Hella xml spawner location is not housing on your shard. I am unsure where housing begins around Umbra.

Hella The Hag will give you a Pumpkin Pet, but first you have you gather parts for her to animate the pumpkin... body parts. She will give you one item at a time to get. Follow the clue to find the named critter. In the critter's corpse will be a knife - use the knife on the corpse to gather the required part. Take each part back to her and she will send you for the next part. She will update your quest book with each task.

The quest book is used to spawn each critter (spawn on carry).

The Pumpkin Pet is a decorative, but mostly useless pet. The spawner statue (a small pumpkin) will spawn the pet. The pet is bonded, and can be ressed, stabled or shrunk, like other pets. The pet "is not good for much, but looks nice on an evening walk. Kind of like you..." ~Hella the Hag

This is not as 'drag and drop' as I try to make quests, because of the decoration. But really only a little decorating is needed (or just move Hella into Umbra?). Anyway I hope you have as much fun playing it as I had putting it together. 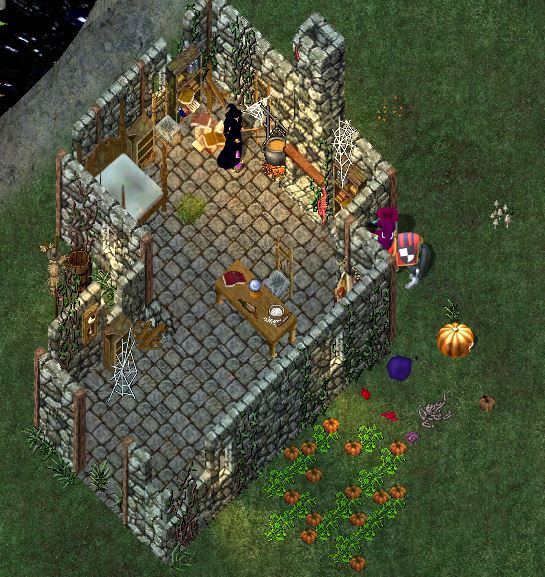