Installation Just copy the 'trick or treat npc' folder into your Custom script folder. Place the NPC anywhere you wish, with a spawner. NPC names - TrickOrTreatNPCSouth and TrickOrTreatNPCEast. I included some xml files for 3 cities (10 NPCs per city).

Player interaction The player simply walks up to any of the Trick Or Treat NPCs and says 'trick or treat'. The NPC will give the player a treat (mostly food/drink).

There is a 5 minute timer (easily modified) to keep players from spamming them for freebies.

The NPC spawns in a random human sized monster body (costumes). You can easily modify the list using the Body Value list I included. I used 10 but you can add, remove, or edit the 'Body' list. I tried to keep them close to human sized. But a Trick Or Treat dragon in Destard or demon in Wind could be fun...

If you use the xml file there are 10 NPCs in each if these cities: Haven, Brit, and Makoto. They each respawn every 45 minutes (like changing costumes).

I made 6 food items and 2 stuffed animals for them to hand out. The Chocolate Scraps are modified from ChocolateDust in an Easter quest of Milva's. The original ChocolateDust was coded by Deikiell. I modified it slightly to make chocolate scraps. Double click them to get a message. The rest of the food & drink is edible, some stack, some does not... life is tough.

Reward Items you should already have

Many of the items are scripts you should already have. They are included with the ServUO repo. I am including the scripts in case you do not have them. If you have them, simply do not use the ones I included. I particularly like the carvable pumpkins. There are 3 pumpkins and a set of carving tools. I included 2 options to get the carving tools because you need a tool for each pumpkin you carve, and there are 3 different pumpkins you can get. The pic does not show all the carvings, have fun carving them all. Also there is a Magic 8 Ball, various monster statues, and couple addon deeds. Again - you should have all these scripts already. They are included just in case. 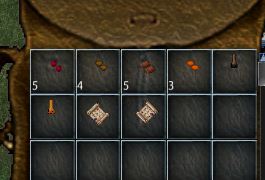 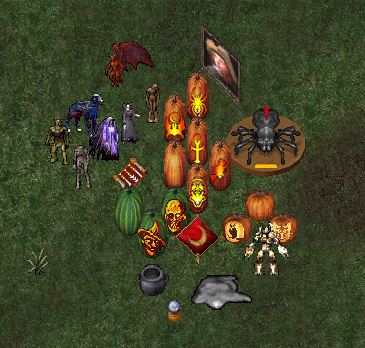