** In this quest it is required to read the gumps - and the quest books - otherwise you will not know where to go or what to do.

A quest looking for artifacts from before the shattering. There are decisions the player makes, to allow for 4 separate endings - and 4 different rewards. There is an option to make the quest repeatable (unlimited), or a single play-through (1 reward per account). To keep it simple I made 2 sets of questgivers, one for single, one for repeatable. For that reason alone I strongly recommend you use the xml file to load the quest. (Plus, there are so many spawner settings, the xml file is the only way I would set it up.)

Place the 'Shards Of Sosaria Quest' folder wherever you keep your Custom scripts. Take the 2 xml files and put them in the root ServUO directory. Then use one of the 2 xml files, depending on if you want your players to be able to repeat the quest or not.

For a single play-through

** In this quest it is required to read the gumps - and the quest books - otherwise you will not know where to go or what to do.

The quest starts in Lord British's Music Conservatory. There is a researcher, named Sebastion, looking for help. He and his assistants are searching for clues to shard fragments and artifacts from the shattering. He first sends you upstairs to search for a map. It will only appear if you are descended from The Stranger (spoiler alert - you are!). But the map is damaged...

When you take the map piece down to him he gives you a choice of 2 ways to go to find the rest of the map. This is the first branch in the quest. If you use the "once" xml, there is a message in this gump telling the player to choose their fate, as the quest is not repeatable. On the "repeat" xml, that notice is not there. (this is the only gump that is different)

From here it is a series of basic find and kill quests all strung together. There are 5 NPCs, 13 monsters, 22 gumps, 22 quest items, and 4 possible rewards (I do not guarantee those numbers except the 5 NPCs & 4 rewards). During the quest there a few 'decision gumps'. They have buttons (2 or 3) with options. Each button will give you a different book of instructions, for the branch of the quest you are on. It is really much simpler than it sounds. On each branch the player will only see 2 or 3 NPCs, and 3-5'ish monsters.

The quest does branch into 6, but joins back together so it is really 4 branches (with a couple detours?).

Each time you give an item to an NPC they delete your old quest book and give you an updated book, and a gump with instructions.

The main quest giver, Sebastion, does move during the quest. You see him in Brit at the beginning and the end. In the middle of the quest he goes to the Lycaeum, and the Lighthouse - but you only go to one of them. There are also 2 assistants you may see, depending on your choices.

More about "once" and "repeat"

If you use the 'repeat' xml, the quest can be repeated at will. There is no limit.

Most of the quest, and the spawners are not affected by the choice of xml file. The 3 'Sebastion' NPCs are different, and one gump. There are 2 distinct Sebastion scripts, for each of his 3 locations, but the names are different so there is no issue. His display name is the same, but in the script his name is different, so no conflict. No need to delete any of the files, but only one of each should be used.

The 'once' Sebastion adds an account tag when the quest is completed, so it cannot be repeated. In Brit, Sebastion's 'OnClick' is disabled it you have the account tag - so he will not talk to you to start the quest. The rest of the quest is OnDrop, so as you drop certain items on NPCs you get further instructions or items. The account tag makes him give a message that you have already helped him. (Pictured below) So even if the player has an item from the middle of the quest - they cannot repeat the quest.

Again, the 'once' means one reward per account. It uses an account tag. I considered using 4 tags - one for each reward - but decided it was too much work (but easy enough for me to tell you do it, if you want it). I would run it repeatable anyway... but the rewards are kind of overpowered... so up to you.

The xml spawners do the heavy lifting

As usual, I let the xml spawners do much of the work. The monsters are 'spawn on carry' (quest book), have a 30 minute duration, and a 5 minute (I think) refract. The spawn on carry seems to override the standard spawn delay, so the refract keeps them from respawning right away.

There are 2 areas where you use an item to join 3 pieces of loot into one quest item. The spawn on carry/refract/delay etc was giving me issues trying to spawn multiple monsters. The spawner would only spawn only one at a time. So I opted for individual spawners for each of the critters. So if you see 4 or 5 spawners in one place, that is why. This way they all appear at once, you can get your items (no percentage, each monster is unique and has a particular item). Then the refract time allows you to assemble the new quest item and leave before they respawn.

There are 3 copies of Sebastion. One in Brit, the Lycaeum, and the Lighthouse (6 if you count the 2 single/repeatable versions). They each require multiple interactions so they are a static spawn. He started as 3 different NPCs but somehow became only one. Apparently he wanted to get out of Brit for a while?

I have been making some smaller quests just to learn how different features work. I made one just to learn the account tags. I made one to learn voice activation. I made one to learn how to string together multiple NPCs. And so on. Each NPC is technically its own quest giver, but instead of a reward they give you instructions to follow for the next step (generally a book and a gump). Some interact with OnClick, most OnDrop. I used only one xml OnSpeak, because as a player I do not care for figuring out the correct phrase...

This is my longest quest so far, but because it branches out, each branch is not very long. Perhaps I should have strung them end to end and made the player do them all, for only one reward?

I included a folder with my work flow. For longer quests I tend to get overly organized. But I never include those files in the upload because they really serve no purpose. But for this long of a quest, some of the info in the folder may be of use, or of interest. It has a good walkthrough, files for all the quest book text, gump text, which NPC does what... etc.

I started with a flowchart, then an outline, then a table. The flowchart is not entirely correct because as I wrote the quest, it grew a little. If you browse through the files, you can see how the quest is supposed to work. The walkthrough file is very helpful. As a work in progress, some of the notes were not used, changed, forgotten...

The Ricardo Talisman is a bit overpowered, but I wanted to see if it would GM your skills if you only had 50 - it does. It is the hardest to get, but none are really that hard. Feel free to edit monster & reward stats to fit your server. 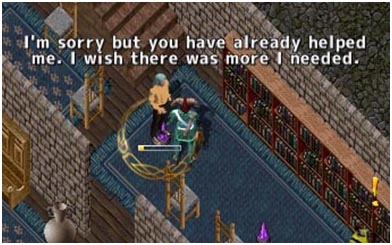 A sample of the quest loot (about half?) 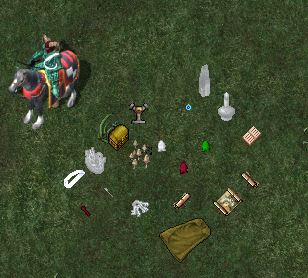 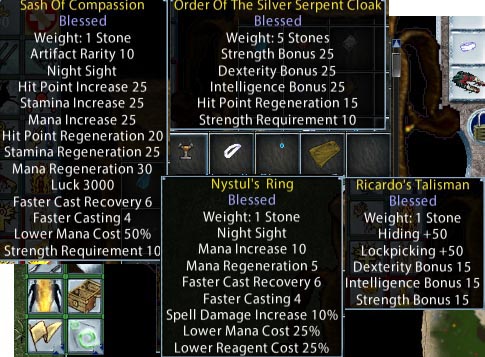