This is an old system we used in the Fishing Council of Britannia (FCB) way back in the day. I was on Great Lakes, the system was devised by Europa players. It reads kind of convoluted, but when you start to use it, it is actually quite easy. And a very sensible & efficient way to organize your SOS. I included a couple pics but they almost make it look complicated... it actually is very easy. The system is based on Alazane's sea chart of Britannia, and the rune regions by Kraken & Landlubber (Euorpa FCB 2003). All I really did was make the instruction book generating script, and update a runebook generator with the regions runes... and the good idea not to lose this system (my longterm backups are concern ha ha)

The only script is really just the instruction book generating script - with the instructions that are typed below. There is also a runebook generating script to mark a book of some reasonable locations. It is really more of an organizing system that I found useful. I thought I would share it, since I have used it for years, and found it very helpful. SOS are not generated in static locations, but can be arranged in general regions. The Davies Locker does show their locations, but does not help organize them. I find this bag/rune system very easy and efficient.

When you organize the SOS into bags, you can grab all of one region and do as many in one area as you have. This system keeps them organized very well by region, and has a rune for each region, so you can launch your boat in the general area.

As I said it is not really a big scripted system, just an organizing method. But I did not want it to get lost. I used it on every shard I have played, since 2003. The only difference is if you are admin you can generate the runebook, otherwise you run around one time marking runes. Still easy.

I almost did not share it because it really is just 2 books in the script. It really is more of a manual storage system - but it is just so useful, I thought someone may like it.

(This is the book that generates)

Based on the map long/lat, the sea of Britannia is divided into 16 regions.

Then you mark 16 runes, which will land you in each of these regions or at least as close to the region as possible.

After you recall from the rune you will simply need to put your boat in the water and begin sailing in the region.

•• Marking the runes. The regions and the recall points of the runes:

* All place names of the recall points are very general in nature. Many can be made at the city docks.

To set this system up you need:

From now on when you fish up a SOS bottle you put it into the pouch, whose rune covers the sector where the SOS is found.

After sorting your SOS out like this (and it is faster than you might think) it will always be easy for you to take all the SOS in a pouch, recall from its rune and fish them up. All SOS from the same pouch will be found within a relatively small area close to the place the rune takes you.

The chest will be able to contain about 90 sorted SOS. A pouch is probably worth doing when it holds 3 or more SOS.

The Rune Library script registers a command 'RuneLibrarySOS' that will create a runebook for all 16 locations. Put the txt file in your "Data" folder, and use the RuneLibrarySOS command to generate the runebook. (Or put it in any folder you want, and edit the script accordingly.) The book will be created at your feet, and property set to movable false. Set it to true...unless you like it on the floor. The command is not player accessible. If you provide them with the instruction book they can make their own runes, or you can give them the runebook as well. Personally, I would not change the setting for players to generate their own books.


The runebook script is based on the Runebook T-Hunting files. Original Ideas and code by // A_Li_N // Senior Member. I have modified this script for numerous runebooks. It is a very handy script (in another package I released some scripts based on this, including quests, t-maps etc).

The easiest way to use this is just look at the long/lat. It is either North or South. The N/S is either high (over 90) or low (under 90). Then it is high/low East/West. This example (67.38 S, 119.23W) is Low South - High West. You find the proper rune and put the SOS in the bag above the rune. Once you start using it, you will see the logic to the rune arrangement. 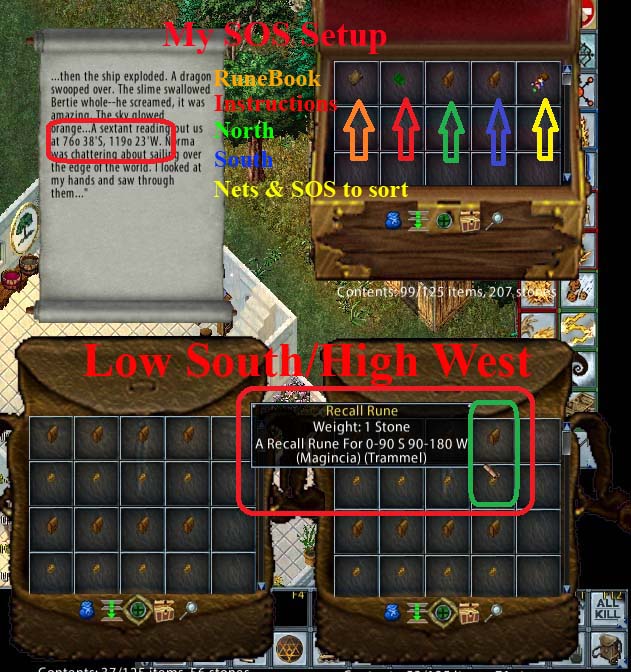 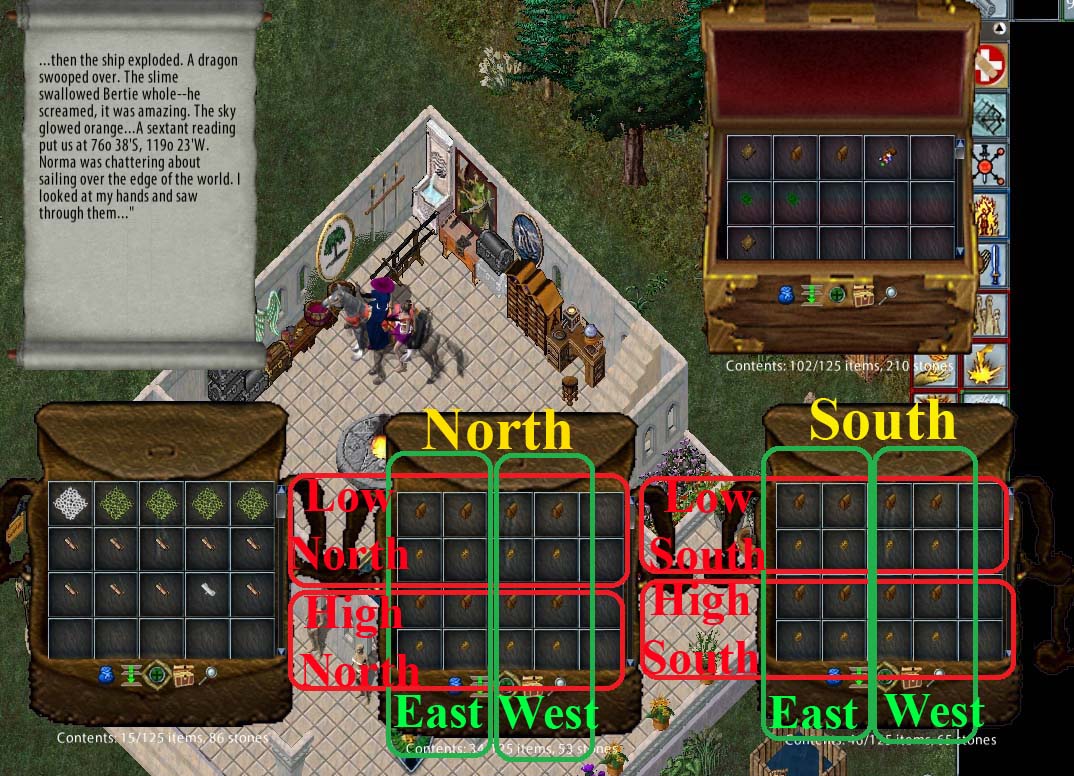